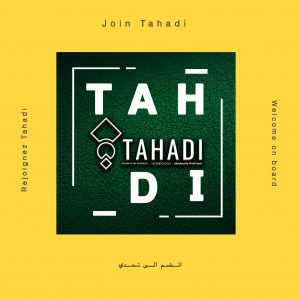 Be part of a change you want to see in our country. Your contribution can help achieve our political project.

Please ensure to type in your Email address correctly, otherwise reply will not reach your inbox.

Tahadi for Modernity and Democracy

No power in the world can stand in the face of an idea that’s a high time for it to come. The formation of our party is first and foremost encouraged by a massive outburst of the Algerian people that began in February 2019 and reached its peak in the beginning of March, the same year.

Our party will strive by word and deed to change the whole body that govern our country, and set the ground for establishing a nation of justice and law, and build Algeria again but with only Algerians themselves without any sort of discrimination TAHADI party breaks up with a stagnant political system that exists since the Independence Day and will spread hope and positive expectations for the future.